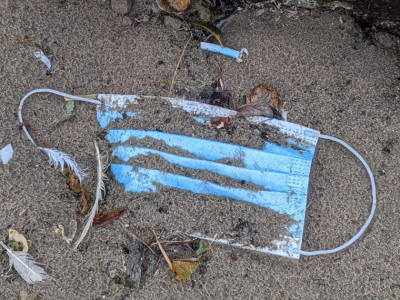 PLEASE remind your friends to dispose of their face masks with care:   (see  " Correctly dispose of PPE to stop new wave of plastic pollution "  ) Source:  https://www.mcsuk.org/news/face-coverings What else is there left to say in a year in which everyone has been touched by some effect of the pandemic? Let me dwell on the positives. My husband and I spent the best part of six months straddling 2019/2020 making once/twice-weekly bus trips to the local hospital to support a friend whose   mental health , for no apparent reason, took a huge hit. Friends rallied round, prayed, and supported the family. We saw no apparent progress for weeks and weeks and weeks. Suddenly from about February he began to show improvement, to the point of being discharged -- just before the first lockdown. It would have been impossible to continue to make those visits post-lockdown. As Christians we are thankful to God for answered prayers. As ordinary human beings, we are thrilled to see how the co
Post a comment
Read more 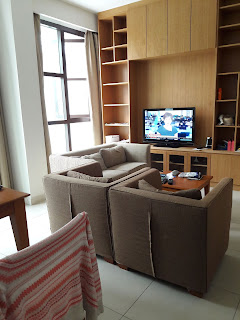 An unusual year all round. January to March: Most of this period was spent in Singapore where I was officially an "academic visitor" with my own small but adequate flat. I had access to a dining hall with the widest choice of food, which resulted in my putting on five kg by the time of my return. April to July: Returned to the husband, now fully retired. Felt a bit remiss that I was not around for his numerous retirement celebrations. But as I had been writing about since Sociology 205 (Sociology of the Family): a spouse's retirement has a huge impact on the stay-at-home spouse. I decided to forgo employment to help us transition through this period and I think there was a lot that we had to learn. We've enjoyed many walks around the park -- brisk walks to lose some weight -- and I am delighted to see how he who was 'limping' has now acquired a more healthy gait and weight. I've also lost those five kg. We spent quite a lot of time planting, and
Post a comment
Read more 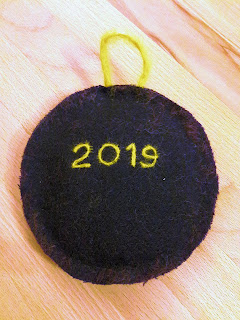 I'm feeling pretty relaxed now, and at the same time a bit excited. It's Christmas eve!! Just finished my annual felting project. I like to have a new bauble every year for the tree. Since I was gifted a felting kit a couple of years ago, I'd made a 'bauble' without bling to mark the passing of years. This year I left it very late and decided to do a baby Jesus, not on a sphere but like a little 'hanging pillow' -- I don't really know what else to call it. And did. Woke up this morning thinking: that old scarf of my husband's -- the one where the silk had become 'hole-ly' and the stitches to the wool part had become ragged and loose -- I could perhaps use that for my project. And did. Last year, I managed sort of felt a camel shape from a decoration bought from The Leprosy Mission (TLM). This year I looked for a clipart. Is it simple enough for me to transfer to felt? And it was.    I did the baby Jesus side. Then I started fel
Post a comment
Read more 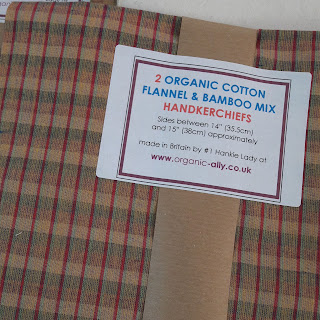 A few customers have taken me to task for using plastic when despatching orders. Let me explain. Some items are sold as 'Gift Packs' and so come in a presentation pack. They also contain instructions for use in the case of Pocket Pouches (how to fold the hankies back into the pouch). Sometimes, especially when the weather is wet, I wrap the whole order in re-purposed plastic. This is plastic salvaged from a dry-cleaning business. You see, when the paper envelopes are damaged and orders get wet, I also get complaints from customers. At other times this plastic is used to ensure that your orders do not exceed the one-inch depth as the postage jumps from 79pence to £2.95 (yes!) when it exceeds that depth. I trust that you will agree that if I am charging £1.20 for shipping, it is not fair for me to ship it at £2.95. If orders are not tied down this way and items move during transit to more than one inch, the recipient has to pay the difference (£2.95 - £0.79) plus a sur
1 comment
Read more

May 23, 2018
Update 1st January 2021:  Avoid using wood burning stoves if possible, warn health experts But a growing body of research reveals air pollution may be damaging every organ in the body , with effects including heart and lung disease, diabetes, dementia, reduced intelligence and increased depression . Children and the unborn may suffer the most. Update 23rd May 2018 : Scandal of 'killer' wood burning stoves and the question - is the political class’s obsession with global warming rotting their brains? "So generous was the Northern Irish scheme to businesses, offering £160 for every £100 they spent on wood chips, that firms used it to heat disused warehouses and long-empty offices, knowing the more they spent on wood chips the greater their profit would be. Some users of the scheme kept heating systems running flat out night and day because they made such a profit from the subsidy scheme." Update 26th January 2017 : Wood stove fad is blamed for pollution
Post a comment
Read more

GDPR - why your inbox is being inundated

Dear Organic-Ally customers and supporters I imagine that, like me, you are getting loads of emails from retailers that you had bought from ages and ages ago asking for permission to continue to send you emails. The irony is some of these have not bothered you for some time but because of new legislation coming in on the 25th May, they are obliged -- or are taking the opportunity -- to ask anyone who is still on their database whether or not it is OK to contact you (but they  already have!) and please could you confirm by ticking a box or clicking on a button?? I am really stuck. I don't actually collect and store any sensitive information from my customers. I don't store credit card details. Third-party providers take care of this. Then once a year, before Christmas, I turn to PayPal and Nochex (payment service providers) for email addresses. As such, these are actual customers who had made a purchase in the previous year. (I do not harvest data by pretending to send o
Post a comment
Read more 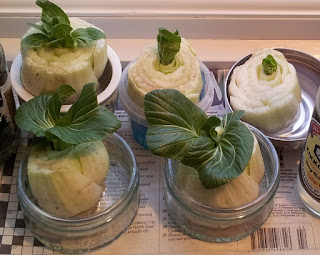 This post is long overdue. I am starting on a second round of reviving bak choy. So I hope you enjoy this. Step 1 Buy some healthy looking bak choy from a (Chinese) supermarket. Lop off the leaves about 1½ inches from the bottom. Immerse in little containers like these. If it's terribly cold, I use water that is just warm to the touch. Put them on a window sill or somewhere with lots of light. And warmth where possible. In the picture above, you can see bak choy in different stages of regeneration. The green leaves traps energy from the sun and soon you will find roots, or root nodules, at the bottom of the stumps. Be patient. It may take more than a week to root. Meanwhile, refresh the water at least once every two days. You will find some bits getting sodden and looking like it's 'rotting'. Remove those bits, clean up the plants under running water and return them to the containers with fresh water. Step 2 When the roots are visible and clearly thriving
Post a comment
Read more
More posts